You are here: Home / News / Dwarf palms planted during the opening event of the Antica Trasversale Sicula

On 3rd of October 2019, during the opening event of the Antica Trasversale Sicula at the Marsala Museum (Director Anna Maria Parrinello) 10 specimens of Chamaerops humilis (dwarf palm 5 with and 5 without cocoon devices) were planted, with the participation of the Archaeological Park Lilibeo (Director Enrico Caruso) and thanks to the precious collaboration of the Engineer Gianluigi Pirrera.

Why the dwarf palm?
This palm is pictured in the Camarina’s coins. It is therefore the symbolic plant of the Trasversale Sicula, paths of 557 km running from Camarina to Mozia (Sicily). It is, indeed, the “Transversal” plant of the Greek Punic, east-west relationship, as a sign of friendship. Similarly in the Hospital card, a unique and precious relic made of ivory, currently conserved in the Museum, represents the union between the Phoenician and the Greek worlds by means of a handshake.

The planted palms were supplied by the forest nursery of Randello, adjacent to ancient part of Camarina, and planted in the territory crossed by the Trasversale Sicula. This is the first of the replication activities that will involve this territory which crosses 37 towns and villages, between coast and inland and which connected the main ancient centers of Sicily from the protohistory onwards, from east to west. Other 28 cocoon devices will be used at different points, along the route in the coming months.

This route crosses the ancient roads of wine, wheat, salt, oil, honey and sulfur, passing through the main Greek, Sicilian, Sicani, Elymian and Carthaginian settlements and sanctuaries, many of which are recognized by UNESCO for their uniqueness. The track was forgotten, but thanks to the efforts of some history and hiking enthusiasts, the entire route was rediscovered in 2017. 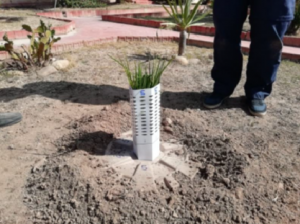 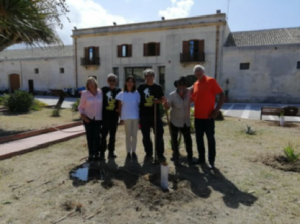 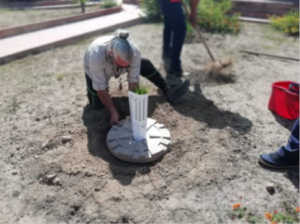